It was on a Sunday morning back in 1979 when the then parish priest Father Laverty made a plea to the public upon the alter in mass to set up a boxing club. He asked anyone interested to attend a meeting in the local Ballyfermot Primary school of Mary Queens and Angels.

The idea of an actual boxing club in the Ballyfermot area appealed to many, including one man that was going to make this dream come true, Stephen Maher, who was instrumental in getting developments going and became part of the committee. The committee members included:

The Original boxing club was given sanction to operate in the toilets of Mary Queen of Angel’s primary school. It was a small area which was a cloak room come toilet. The boxing ring took up 70% of the space, 10% for the four hanging bags and 20% floor space, there where wooden boards which would have to be put up and took down each night to keep the school clear the following morning as the school children would need access to the toilets.

For over 20 years these were the conditions boxers in St Matthews endured. Against all the odds, and only through the constant lobbying, perseverance, determination, passion and drive from Stephen Maher, Ballyfermot would never have got its own proper boxing club.

Eventually €65,000 from the drugs task force to build the club extension was granted. Things were looking good until the schools Board of Management rejected the plan. Many felt at this point that the new club would never be achieved. Stephen was told it was a lost cause.

Stephen did not give up instead he battled harder like a true champion. He spoke with Father Seamus Ryan the parish priest of St Matthews, who introduced Stephen to Monsignor Wilson of Archbishop House in Drumcondra and after many exhaustive meetings, Stephen’s persistence paid off. St. Matthews was finally offered a piece of land on Drumfinn Road at the end of the Mary Queen of Angels School yard, the same school the club operated from a toilets of which, had been the Club’s home for twenty years.

Stephen then engaged the expertise of an Architect and gave him the plan and vision he had drawn out. After the plans were drawn up, the cost of the development was going to come in at €380,000. The club now had the site and the plan, but no money.

Round two began, the club’s then chairman Brian Courtney, introduced Stephen to Linda Kavanagh who was a local councillor in Ballyfermot, after she saw we were training in the toilet area of a school, she was shocked and took on the club’s cause with committed determination. Many other TDs, local and National politicians did not want to step into the ring and fight for there local boxing club, in fact many said to Stephen outright, there was no chance of getting a new club, it was a pipe dream.

However Stephen relentlessly kept up the campaign to get the new club and one Friday night in the year 2000, while sitting in the audience of the Late Late Show, Linda Kavanagh made an audacious move which created the impact needed.
The then minister for sport Jim McDaid, was talking about the proposed Bertie Ahern Stadium in Abbotstown and the value it would bring, even though the cost was over two million punts. Linda asked the question live on national television; would it not be better to be spending this money on building sporting facilities in deprived areas where communities would see the real benefit?
Linda went on to explain the training conditions for the boxers in Ballyfermot had to endure and eve that one of the stipulating conditions of St Matthews Boxing Club receiving the required €380,000 grant, was the club had to have 10% of this cost in our bank account. Linda went on to put the question to the minister, how could a small club in Ballyfermot with minimal facilities, that trains boxers from the toilets of a school, have that type of money?

The answer came back that it could be reduced to 5% which was €19,000, still an impossible task. Linda expressed this concern and received an astounding applause from the audience. The Minister sidelined the question by saying there were ways around it, before the spotlight was took from Linda.

The impact from Linda’s moment in the spotlight came through and in a great surprise two weeks later, Stephen received a letter from Fianna Fail T.D Marian Mcguinness, stating that the young peoples facilities was granting St Matthews Boxing Club €315,000 to help build the new club.

Stephen had got the news he had been fighting over 10 years for and got agreements with Dublin Corporation, the board of Works, the Board of Planning. St Matthew’s will never forget the advice and help received from Linda Kavanagh, who sadly died of a brain haemorrhage before the opening of the club. If you visit St Matthews you will see a plaque put up in the club acknowledging Linda’s role in getting the funding for the new club, she will always have a place in the heart of St Matthews boxing club.

Over the years St Matthew’s has had some exceptionally dedicated coaches, Stephen Maher, Frank Hynes, Mick Hyland and Paddy Malone were some of the more familiar names from the outset of the old boxing club. As the years went by, Paddy Malone sadly passed away and the others would regally admit that they were getting older and hadn’t got the time or energy they had in their younger years.

A special mention must be given to John Brannigan, who had been an active trainer for a few years before the new gym opened. John played a major role in keeping the club going, and it must be acknowledged that John was giving up virtually all of his free time to do so. St Matthew’s owes him a great debt of gratitude. Unfortunately for the club, John’s other commitments with work and so on grew to the point where he was not going to be able to continue coaching.

We would also like to extend our thanks and well wishes to Brendan Dunne and Greg Ormond who had been coaches for over five years and unfortunately had to resign due work and family committeements.

Robbie has felt the development of the club needed to be progressed by taking in female boxers. From 2012 Robbie lobbied and campaigned and continued organising fundraising events to build female changing rooms and toilets. In 2017 after much campaigning Robbie received word that they had secured partial funding to facilitate the building works required. 2018 saw our first female boxers enter the gym. 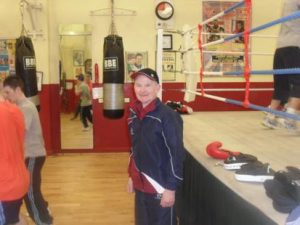 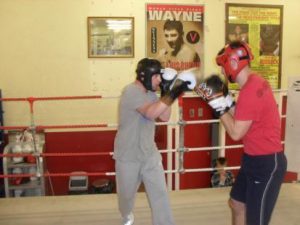 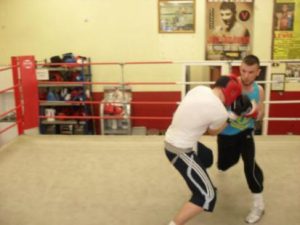